If you have not yet read The Hunger Games and want to, do NOT read my post today. The image is part of the spoiler.

Okay, I may be sick today and I was trying to take the day off but, I have this image in my head that I had to put down on paper. It also worked into Illustration Friday – Beneath.

On Tuesday I finished up book one of The Hunger Games. It is an incredible story and not one I ever expected to find in a YA novel. The situation is disturbing, I honestly wasn’t sure I could read the book after getting to page 50. However, the characters were already entangling themselves in my heart and I had to know what happened to them.

I made it to part 2, The Games, while I sat in a coffee shop reading. The story unfolded beautifully. The writing was well put together, never over blowing the violent situations. Each incident was placed before the reader in a way that was able to be received without being a tearing blow. I was very impressed by this. However, the book does leave you sorrowful.

One scene in particular hurt so much I had to stop reading and take a walk around the cafe I was in to pull myself together. I could have wept but, I didn’t want to frighten the people that were sitting next to me. This was the scene where Rue dies. It was inevitable. The author, Suzanne Collins wrote this in perfectly. She let us just get to love Rue then she took her away as quickly as she gave her to us.

Of all the characters I loved Rue the most. She was such a beautiful character. I have another image I want to draw of her too. One that is more in her element but, for now I mourn Rue. 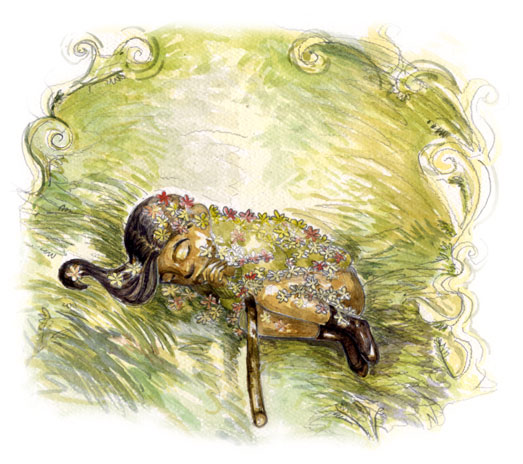