Octo-Puss in Boots still lives on. I have only gotten a few in the past couple of years.

At DesignerCon 2015 I was able to ask Leslie Levings of Beastlies and Shing Yin Kor of Sawdust Bear to each create one. They are such inspiring ladies. They have even created a inspirational away workshop, Wayward Ladies, for creative, full-time artist, women to participate in. They have already passed their time frame for accepting submissions for attendees; look for it next year. 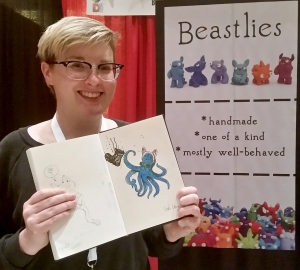 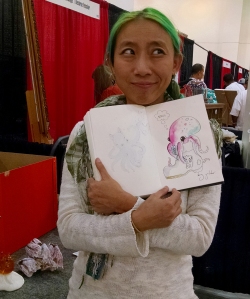 In earlier fall of 2015 my husband and I were able to sneak away to a Ben Hatke night in conversation with Gene Luen Yang about Ben’s book Little Robot. They were incredibly inspiring and kind in their discussion about their process and creativity. At the signing we were able to ask them to create Octo—Puss in Boots for us. I don’t think they planned on making almost the same face. (So sorry the Gene photo is so blurry! we were rushing to return to the sitter.) 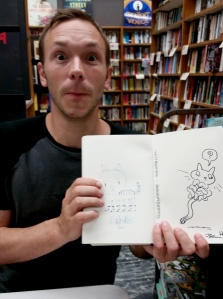 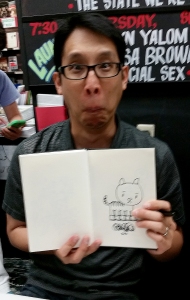 Then just last week I went to see Kwame Alexander at Kepler’s my teacher from Storyteller Academy, Arree Chung joined me for the event. We were able to chat afterwards and he contributed an Octo-Puss in Boots. 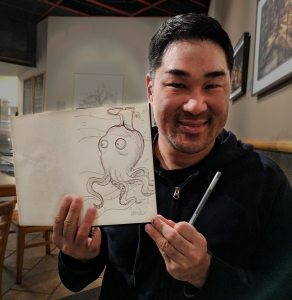 I am always awed at the creativity and uniqueness of each individual Octo-puss in Boots. Thank you all for being willing to contribute.

One thought on “Octo-Puss in Boots Catch up!”