We arrived to town five minutes before closing time, but were still welcomed into a restaurant for dinner. That was how all our other experiences with locals continued. It was great to be around such friendly-laid-back people. Notable mentions go to Dave at the docks who served the most delicious blueberry muffins I have ever tasted and the bar keeps at Finback who welcomed us die hard football fans for the first game of World Cup at 10am Friday morning.

The first couple of days at the Harbor were spent around town, going to the exposed bar, crossing to and climbing Bar Island, and Whale Watching. Whale watching was a mistake for me, I apparently get sea sick as soon as you leave the calm of a harbor. I kind of witnessed the puffins, bald eagle, and 6 Fin whales that passed the ship.

For those that don’t know, only whales with thin peduncles, the area from the Dorsal fin to the Tail, lift their tail out of the water for diving or general swimming. To see tails, you really need a humpback to travel by. You are more likely to see Humpbacks in July or August. We did see some playful behavior, one whale turned on its side and we saw a part of its tail. Also People that could stand up were able to see the jaw and belly.

During these days I was putting my drawing hours into Ripples, a blog put together by Kelly Light. These were my contributions, first batch and second batch. Please take time to look through all of the amazing art and support however you can!

After a crazy climb in Acadia on Wednesday where I strained my legs carrying Lucien down the mountain, I spent my time quietly sitting and drawing.

(click on the images to see them full size)

A local and friend from high school, Ian Kirk, said I captured Sand Beach accurately. While I drew this, Matt climbed the ledges on the left and disappeared for half an hour. The little dark spots throughout the water mark all the creatures we saw while I sketched this, a seal, dolphins, and birds.

A trip to the whale museum gave time to sketch whale skeletons; that was a blast. I could have spent a whole day there, but I needed a bigger sketch book.

Lupines are all over this area, the plants and art depicting them. They are very complex, but I tried my hand at them.

Our trip ended Saturday, with an early leave to make it back for the England vs. USA World Cup game.

This is how Maine left me feeling: 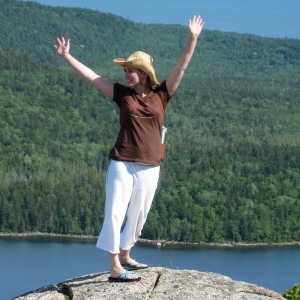 For pictures and more story check out my livejournal